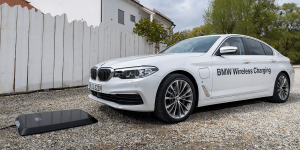 BMW has been pondering to offer wireless charging for its 530e iPerformance this year for some time. However, such induction will now become available first as an option for leasing customers only but production of the system is set to start this summer.

The BMW 530e iPerformance was always conceived as ready for inductive charging (we reported). New information quoted in Car Magazine suggests thoug, that for now this will remain an exclusive option for those with a leasing contract.

The decision is not so much a question of the technology being ready or not but one of practicality. Most 530e iPerformance cars are owned that way, leased that is. The 530e iPerformance leasing deal will only be the first to include the inductive charging system but BMW is to roll it out as an option for its other hybrid and electric cars eventually.

Production of BMW’s own inductive charging system is set to start this July and it will be offered in Europe at the same time. Clients in the States may also expect the arrival of wireless charging for BMW plug-ins shortly after.