OMV acquires stake in Smatrics: The Austrian energy and petrol station group joins Smatrics with an interest of 40 percent. So far the charging infrastructure JV was owned by Verbund and Siemens. OMV intends to kick off the installation of Smatrics quick charging points at its petrol stations in Austria and Germany. Also, further expansion to Czech, Slovakia, Slovenia und Hungary shall be examined. Besides, OMV wants to evaluate common concepts in green hydrogen.
af.reuters.com, omv.com 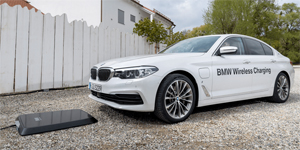 PHEV of BMW’s 5er – soon also inductive: Just a few weeks after launching the newest generation of its 5 series, BMW brings the PHEV version of its business sedan on the roads. The 530e iPerformance comes with 252 PS and a 9.2 kWh battery to reach 50 km through electric power. Pricing starts at 52,600 euros. From next year on, BMW intends to optionally offer the PHEV model with an inductive battery charging system.
press.bmwgroup.com, welt.de (inductive system, in German)

Honda to produce EV with GAC: At the Shanghai Motor Show, Honda revealed its plans to enter the Chinese market with dedicated EV as soon as next year. Automobil Produktion reports, that the production process will be operated at a site of joint venture partner GAC. The same is planned with a PHEV version of Honda’s Accord in 2018 and two PHEV models created by the Honda/Dongfeng joint venture could follow a year after.
automobil-produktion.de (in German)

Chrysler’s electric minivan to go serial? According to Fiat Chrysler CEO Sergio Marchionne, their all-electric concept car presented at CES in Las Vegas could enter mass production within the next two years. The EV model is a semi-autonomous minivan with 400 km of range and 350 kW fast charging function. Apparently, also regarding to this model Chrysler counts on a cooperation with Google subsidiary Waymo which already today deploys Chrysler’s hybrid vans and just ordered 500 Pacifica hybrids (we reported).
freep.com

Sharing service with autonomous cars: Last year, Dutch start-up Amber presented its own concept EV specifically designed for its car sharing. Now the company introduced details about its plans, announcing the creation of a mobility service with autonomously driving cars – first in the Netherlands, later throughout Europe. First tests are scheduled for mid-2018 in Eindhoven with modified BMW i3 models, which will use bus lanes during the night. In the future, Amber intends to equip its own EVs with the necessary tech.
businesswire.com, nu.nl, ad.nl (both in Dutch)

Volvo kicks off XC60 production: The carmaker started the production lines for the crossover XC60 in its site in Torslanda, Sweden. Under the additional label T8 Twin Engine a PHEV version is to be build, too – just like it is the case with the top version of the bigger XC90.
greencarcongress.com, media.volvocars.com