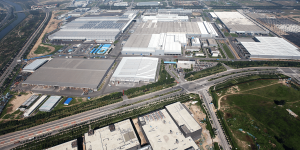 Daimler wants to start the production of its first EQ model in China before the year’s end. The EQC electric car is to be made in a Beijing Benz Automotive (BBAC) facility in Beijing. On sale in China is set for 2019.

The EQC will be the first of a total of four planned electric cars which Beijing Benz, the company Daimler shares with BAIC, wants to produce in China.

The current plant is the existing BBAC facility located in Beijing’s Yizhuang district. Overall, Beijing Benz is in the process to increase their production capability and recently announced they would invest 1.5 billion euros to not only refurbish an old BAIC factory but also to build a new plant in Beijing, this time in the Shunyi district (we reported). They also plan to establish a battery production facility in China.

Moreover, Daimler wants to turn to sustainable production powered with electricity from renewables, at least in Europe. States Markus Schäfer, Member of the Board, Production and Supply Chain: “From 2022, the production of our Mercedes-Benz plants in Germany will operate CO2-neutral. Thereby, we completely forego coal-based electricity and obtain our electrical energy from only renewable sources.”

In future, 100 percent of additional purchased electricity will come from verifiable renewable sources, such as wind- and hydropower. Other plants in Europe will be set in a similarly sustainable fashion according to the press release.

Nothing has been said about a similarly green initiative in China.

Update May 17: A previous version of the article placed EQ production in Beijing’s Shunyi district, following media reports. Daimler reached out to us at electrive, saying the factory is in fact in Beijing’s Yizhuang district and the usual BBAC plant. This has been corrected above.