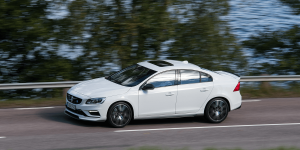 The Swedish brand has said before that it would discontinue diesel or, on an even more positive note, electrify its entire line-up. The first model to benefit from the new strategy is the next-gen Volvo S60 for which no diesel engine option is available.

For Volvo, the S60 sedan marks only the start of what is to become a long line of electrified models formed by mild-hybrids as well as plug-ins. The first all-electric model, a 40 series can be expected next year (we reported).

Volvo’s call for electrification had become louder over time. Not even a month ago, the Geely-owned firm announced their target to have fully electric cars account for half of all sales by 2025.

On the launch of the S60, CEO Håkan Samuelsson now confirmed this aim, saying: “We will phase out cars with only an internal combustion engine, with petrol hybrid versions as a transitional option as we move towards full electrification. The new S60 represents the next step in that commitment.”

Different from their upcoming electric model, the S60 is based on Volvo’s Scalable Product Architecture (SPA) rather than the Geely-wide new CMA (Compact Modular Architecture) designed to accommodate all drivetrains, including PHEV and electric motors so that it will underpin the first electric Volvo as well.

But also the new S60 will initially be available with two petrol plug-in hybrid versions once sales start in spring 2019. Mild hybrid versions will follow later that year. Built in the States, the S60 will be sold there and exported to other markets as well.