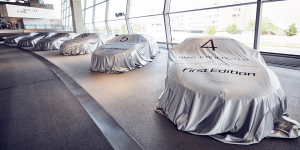 After BMW started serial production of the i8 Roadster in Leipzig in early March, the first models of the open version of the plug-in hybrid have now been delivered. The BMW i8 club has received the keys for the first 18 vehicles.

The i8 Roadsters are the “First Edition” variety, which is only available for a limited time and limited to 200 vehicles worldwide. An engraving on the central console marks the vehicles as collectors editions, reading “1 of 200”.

The 18 vehicles also feature a special engraving with a “1 of 18” line, as well as other features including ceramic applications for control elements, DryCarbon interior paneling as well as a logo-projector in the door.