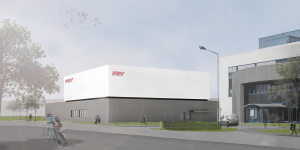 The ground has been broken in Alsdorf close Aachen, where the StreetScooter was born and that is home to prolific RWTH Aachen. For FEV, it will be an expansion as the new building is next to their existing engineering offices.

The additional facility is to focus on testing an development of electrified vehicles. Says Professor Stefan Pischinger, CEO of FEV: “Further reduction of emissions and consumption is becoming increasingly important for our customers in light of current social discussions and regulation of future consumption targets. This investment at the Alsdorf location takes into account the development of clean and highly efficient drive systems.”

The new centre will have a four-wheeled chassis dynamometer for performing emissions tests in accordance with the latest legislation from the US, Europe, China, Japan, and India. In addition to the measuring and testing equipment, the testing centre is designed for developing hybrid and electric vehicles.

For conditioning, they reserved 1,700 square meters which include three different temperature ranges for conditioning, from -30°C to 50°C (-22°F to 122°F). The overall layout is optimised for roller and PEMS test operations and will also allow an additional test bench and solar simulation system to be added in future.

The expansion will also double the space for test vehicles at the Parc Fermé by an additional 200 spaces. There will also be charging stations for hybrid and electric cars.

This is not the only expansion down to growth in the electric transport industry. FEV just built on its durability test centre in Saxony-Anhalt where they installed seven new test rigs for electric motors. The company is investing more than 13m euros in its facility and got 1.9m euros from the state reportedly.
Also FEV’s battery testing centre in France is being expanded and will reopen before the year’s end. There, the 600 sqm building will host four walk-in chambers to test big traction batteries, four battery-pack chambers with a test capacity of up to 1,200 V and up to 300 testing channels for battery cells and modules.

The FEV Group employs over 5,000 specialists in high-tech development centres at 40 locations on four continents. Their headquarter is in Aachen.