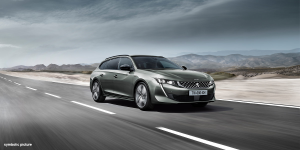 Peugeot has taken the wraps of the 508 SW, an estate wagon due for launch next year. From mid-2019, expect a plug-in hybrid version to arrive in Europe. But first it will debut at the Paris show this October.

For Reanult, the 508 SW blends functionality with design as it follows the lines of the coupé. The bigger estate car offers much space though with the boot holding up to 530 litres.

It will first go on sale with two petrol and four diesel options in 2019. However, later that same year, Peugeot promises a Plug-in Hybrid petrol powertrain with an extended zero emission range of 50 km (WLTP cycle). The batteries will be located under the back seats to preserve the roomy boot.

Like the saloon, the Peugeot 508 SW will be made at the Mulhouse plant in France.

Daimler building Full-Flex-Plant for EVs and ICEs in Hungary