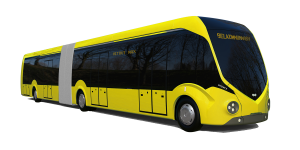 The Belorussian manufacturer Belkommunmash has received an order for 60 electric buses from the capital Minsk. The first 17 electric buses will be delivered this year, with the other 43 following by the end of April 2019.

The order asks for two different bus varieties – 28 units of the Vitovt Max, also known as the E433, and 32 units of the E321. The first model has a performance of 163 kW and a top speed of 60 km/h, and features space for 153 passengers. The second model is based on the trolleybus from Belkommunmash with the same name, with about 12 m length, three double doors and space for 101 passengers.

In Minsk, about 400 of the buses are in use, according to the manufacturer. The company is one of the largest electric bus manufacturers in eastern Europe, and has been playing with the idea of establishing another factory in Georgia.

Recently the company made headlines for the delivery of 40 trolleybuses to the Russian city of Togliatti. This had been the largest electric bus order to Russia in the past three years. In 2017, the Serbian capital Belgrade also ordered an electric bus for testing. There are multiple signs that the city is planning to order 60 electric buses in the near future. The Belorussians plan to secure the order with lower prices than the competition.