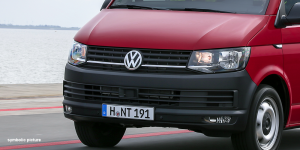 In the coming year, the next generation of the VW T7 bus will be introduced. Currently, the Wolfsburgers are testing several vehicle variants under the chassis of the current generation. It may happen, that the T7 will be introduced as a BEV in the second half of 2020.

The reasons behind the upgrade are mainly the use in urban areas, which may soon be affected by driving bans for combustion vehicles. This also puts somewhat of a question mark behind the segment, which has been traditionally dominated by diesel vehicles.

The question of which platform to use is also still outstanding with the T7. Reports indicate, that the new T7 may be based on the modular transverse matrix platform. That would certainly make the planning process easier, as well as the choice of the drivetrain. The MQB platform has been shown to be effective at electrification, for example with the VW e-Golf. The VW T7 is also planned to receive a 48 volt electrical system. This would allow for a mild hybrid version, next to a battery electric version and a plug-in hybrid.

If Volkswagen does actually release an electrified version of the T7 remains to be seen. In 2022, the electric van the I.D. Buzz will be released, which is also planned to come as a cargo version. An interesting question to answer will be whether the MEB platform is strong enough to carry the loads a T7 would normally be tasked with.

Update 28.08.2018: The rumours regarding the electrification of the VW T7 have received new wind in their sails: A German newspaper published images of a test vehicle with a suspicious flap above the rear left wheel arch. Behind it, we suspect there may be a charging port hiding, which hints at a hybrid version of the T7. A sticker on the driver’s window saying “hybrid vehicle” certainly supports the thesis.

Update 13.03.2019: According to media reports, VW Commercial Vehicles does not want to launch the T7 on the market as a completely battery-operated version, as planned. The company recently decided to build the next generation of the van as a combustion engine with a hybrid drive due to “bottlenecks in development”. Compared to other models, the T7 would have been produced in only a small number of around 25,000 units over five years.