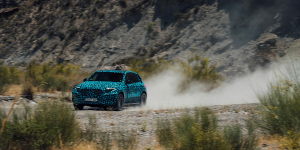 After the successful completion of winter testing for the EQC, Mercedes-Benz has sent the vehicle to Spain to undergo an extensive stress testing program under intense heat and sun, with temperatures up to 50°C.

A particular focus is being thrown at the AC unit, the charging and cooling of the battery, the motor and the steering devices under extreme heat. Nearly 200 prototypes and pre-series models are being tested, according to Daimler.

The primary challenge will be the dry heat. While the batteries deliver reduced performance when cold, the heat carries the additional danger of permanent damage being done. The goal of the tests in Spain is to find the optimal management of these physical properties, among other things. Another room for testing is the acclimatization of the interior, during driving, as well as before, as Mercedes sees an important comfort factor in appropriate acclimatization before the driver enters the vehicle. Fine dust is also expected to play a challenging role during testing. Testers aim to discover where dust settles in the machine, and how this will affect motor integrity.

Michael Kelz, chief engineer for the EQC stated: “With the finishing straight in sight, we are now able to absolve another extremely demanding test programme with our pre-series vehicles.” The engineer views the vehicle as being on plan for the path to serial production. Journalist Michael Specht was able to ride along during one of the tests, bringing some details regarding the vehicle to light: The slightly more than 70 kW capacity battery will have to be charged with a 115 kW connection at DC fast charging stations. The range is expected to be above 400 km, according to WLTP. According to Specht, this is enough to make the EQC a primary household vehicle.