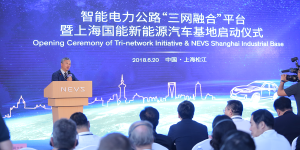 The Swedes (kind of) are coming to Shanghai as NEVS establishes both a new production facility and innovation centre in China. Their approach is trifold though with new partnerships to grow networks in not only transport but energy and information as well.

NEVs calls this their Tri-network, designed to install a whole ecosystem of electric mobility in the country. All taken together, NEVS wants to help the People’s Republic to progress from a Made in China to a “Designed by China” approach, as Xiangmin Chen, Secretary of the Songjiang District Committee in Shanghai, noted.

But first their core business, building electric cars, for which NEVS are setting up a new facility in Shanghai. Running under the name “NEVS Shanghai Industrial Base” the new factory will essentially copy the one that the China-owned former Saab outlet is currently completing not far from Beijing. Both plants will have a maximum production capacity of 200,000 electric cars annually, with 50,000 EVs in the first stage.

It will become a constituent part of the ‘Tri-Network Initiative & NEVS Shanghai Industrial Base’ that is to be established in the G60 Science & Technology Innovation Valley in Shanghai. NEVS’ approach is that the joint work on transport, energy and information networks will give rise to new business models for the electric vehicle industry.

For this NEVs has bought the support of two Swedish companies Elways and Mimer. Elways is working on mobile inductive charging via cables laid into a road and the company has already set up the eRoad Arlanda in Sweden as a proof of concept and testing ground.

Mimer in which NEVS now also holds a stake, then delivers database solutions. Elways will be tasked to integrate the electrified road technology along with Mimer’s database management and built-in data processing solutions to provide real-time transport data and enable electric vehicles to both drive and charge safely.