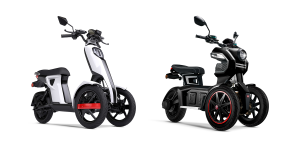 Austria’s KSR Group has imported more than 50,000 electric scooters in Europe under the Niu brand. Now their new label Doohan will make its entry with two all-electric two-wheelers running on Bosch motors and Panasonic/LG batteries.

The iTango and iTank feature three wheels each, however due to the dual wheels in the front being narrower than 60 cm, the vehicle counts as a two-wheeler, with all the parking benefits of a scooter, but the added stability of a trike.

Both scooters are powered by Bosch electric motors, powered by lithium batteries by LG and Panasonic. Both models are offered with a 45 km/h version, while the iTank will additionally be offered as a 70 km/h version with two batteries, which requires a motorcycle license, unlike the smaller version.