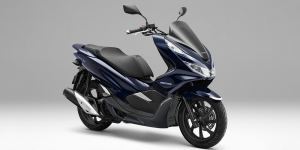 Honda is expanding their scooter range with a motorcycle hybrid system that will come to live inside the PCX HYBRID. The company says it will be the world’s first mass-produced hybrid scooter once it kicks off this September in Japan.

The hybrid scooter model is based on Honda’s PCX series. Only the PCX HYBRID is powered by a lithium ion battery that acts as a boost when starting and accelerating.

The 48 Volt system hinges on the ACG (Alternating Current Generator) starter. It assists for 4 seconds after a turn of the throttle. Honda says this enables “agile acceleration” and also gives the PCX HYBRID a sharp throttle response.

The hybrid system also sets in when idling.