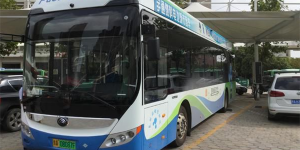 The city of Zhengzhou in China is testing 20 hydrogen buses made by Yutong. The first two have taken to the roads already, now serving on route 727. Another 18 fuel cell buses will follow as part of a commercial demo operation.

This is the first time Zhengzhou in Henan province is trialling hydrogen powered buses. Compared to their existing electric buses with 200 km driving range after being charged for two hours, the hydrogen fuel cell buses boast 500 km driving range and less than 10 minutes refueling time.

Wang Shuzheng, head of the Fleet Management Department of the Zhengzhou Public Transportation Corporation, sees developments in the sector as ever changing, under one premisse: “From diesel and gasoline powered buses to hybrid and full electric buses, to hydrogen fuel cell buses, the fuel form of buses is constantly changing, and the bus models are also upgrading. All these are aimed to give citizens a more humanized and clean travel environment.”

The current fuel cell electric vehicle developed by Yutong of China is equipped with four hydrogen leakage sensors. Further improvements have been made in passenger comfort, i.e. through the “kneeling” function allowing for easier access.

The hydrogen buses are being operated by Zhengzhou Public Transportation Corporation (ZPTC).