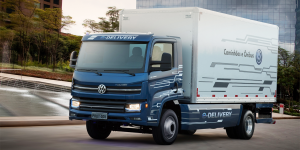 Brazilian beer maker Ambev plans to add 1,600 electric trucks to fleets of its logistic suppliers. The first will be the VW e-Delivery that is to hit the road this year. It is the kickstart of a trial designed to find the zero emission technology serving Ambev best.

Latest by 2023 however, Ambev wants to run 35 percent of its third-party fleet with electric vehicles. They believe the e-Delivery’s range of 200 km will suffice for most of their logistics operations.

For Volkswagen’s Brazilian arm it is a huge deal. VW Caminhões e Ônibus will produce the 1,600 electric trucks in Brazil. Volkswagen had located production of the e-Delivery there from the start and claims this to be the first zero emission truck in Latin America.

Moreover, the partnership between the vehicle maker VWCO and Ambev brewery is set up long-term, yet not new to either of the firms. “Thanks to our 20-year long partnership with Ambev, we have been the first to develop commercial vehicles for beverage distribution. And now, once more, we sprint off together to enter the electric era”, explains Roberto Cortes, CEO of VW Caminhões e Ônibus.

The agreement comes well in time as well as Brazil has issued a new policy that exempts electric trucks from new fixed minimum freight fares for diesel vehicles. The latter were designed to raise minimum wages for truckers and followed industrial action across the country.

Ownership of the electric vehicles, which will replace older trucks, will be with 20 logistics companies that distribute Ambev’s products, according to the company. Their identity has not been disclosed.

Ambev owns brands like Skol, Brahma, Antarctica and Guaraná. Their order of 1,600 electric trucks translates to the electrification of one third of its delivery fleet by 2023. Ambev estimates the e-Delivery electric truck fleet will save about 30,000 tons of carbon emissions per year.