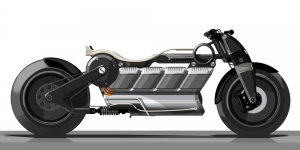 The US American motorcycle company Curtiss Motorcycles (previously known as Confederate Motorcycles) has revealed their second electric motorcycle concept after the Zeus, aptly named Hera. Technical details have not been revealed, but we do know that Hera will also feature two electric motors.

Curtiss CEO Matt Chambers did not hold back any praise when speaking about their new motorcycle: “With Hera, we set out to create the world’s most luxurious motorcycle. Featuring the world’s first V8 battery architecture, an ultra-powerful, yet refined, E-Twin motor, and a 66-inch wheelbase, Hera will occupy a class all her own.”

The architecture is further explained by head of design Jordan Cornille. Hera’s layout was inspired by Glenn Curtiss’ V8 motorcycle, with which he earned the record of “fastest man on earth” in 1907. At the time, he managed to accelerate his bike to 219.4 km/h. The design of Hera takes a few liberties, replacing the 8 traditional cylinders with lithium ion batteries. The whole thing has been named a “V8 battery architecture”. Regarding the top speed of the new bike, the company has only stated that it would leave it’s historical counterpart in the dust.

Similarly to the Zeus, Hera also benefits from the twin e-motor concept from Curtiss, that uses Zero Motorcycles electric motor technology. The technical details from the Zeus can provide some insight into what we can expect from Hera at this point: With 127 kW motor performance and a 14.4 kWh battery capacity, the Zeus will be one of the most powerful electric bikes on the planet when it hits the market in 2020.

The renaming from Confederate Motorcycles to Curtiss took place last September. The manufacturer has also refocused their business towards electric mobility since. The name Curtiss is an homage to motorcycle and pilot pioneer Glenn Curtiss. Zeus and Hera are to be joined by more electrified motorcycles that would make Glenn proud. They plan to offer bikes for all financial segments.