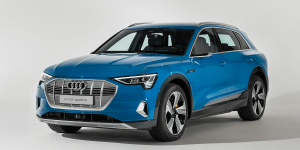 Audi has put a lot of effort into the e-tron and it looks like it has paid off. Their first electric car premiered in San Francisco today and has what it takes to truly rival Tesla. Moreover, the model sends a message from VW saying, they can do more than just cheating on emissions.

Nine years after the introduction of the Model S, manufacturers from the land of “Das Auto” seem to have regained their voice to answer finally. Different from the Mercedes’ EQC though, that reutilises a platform for ICEs, Audi developed the e-tron from the ground up as an electric car, much like BMW did the i3 years ago.

Different from being quirky or a show of what is possible though, Audi’s electric SUV is designed to deliver in the segment. A feat only achieved by Jaguar with the I-Pace before. Of course, a Tesla Model X can provide even more seats and the Californians have set up a suitable infrastructure already while IONITY is only in the making. Nevertheless, the Audi e-tron looks well thought-out from start to finish and the spec presented at the launch event supports this impression.

The two electric motors made by Audi provide a maximum output of up to 300 kW, thus delivering 165 kW on the rear axle and 135 kW on the front axle. The latter is an optional push, resulting an a max torque of 664 Nm. Audi has not (yet) said anything about the permanent performance of the system but did specify the top speed at 200 kph.

Audi offers seven different driving modes with various acceleration. Those wanting to save some energy best opt for mode D with a system performance of up to 265 kW and 561 Nm. Then the two electric machines accelerate the electric SUV from 0 to 100 km/h in 6.6 seconds but for no longer than 60 seconds.

The liquid-cooled lithium-ion battery with a standard capacity of 95 kWh is located between the two axles. Divided into 36 modules, each is equipped with twelve 60 Ah pouch cells. Yet, the story may continue as Audi says they have an option for using other forms such as prismatic cells, similar to Jaguar.

In its current form, the battery weighs 700 kilograms. To compare, Mercedes’ 80 kWh battery weighs 650 kg, meaning Audi has managed to create a battery that is lighter in relation to its capacity. While the EQC weighs 8.13 kg per kilowatt hour, the Audi e-tron weighs only 7.37 kg at system level. 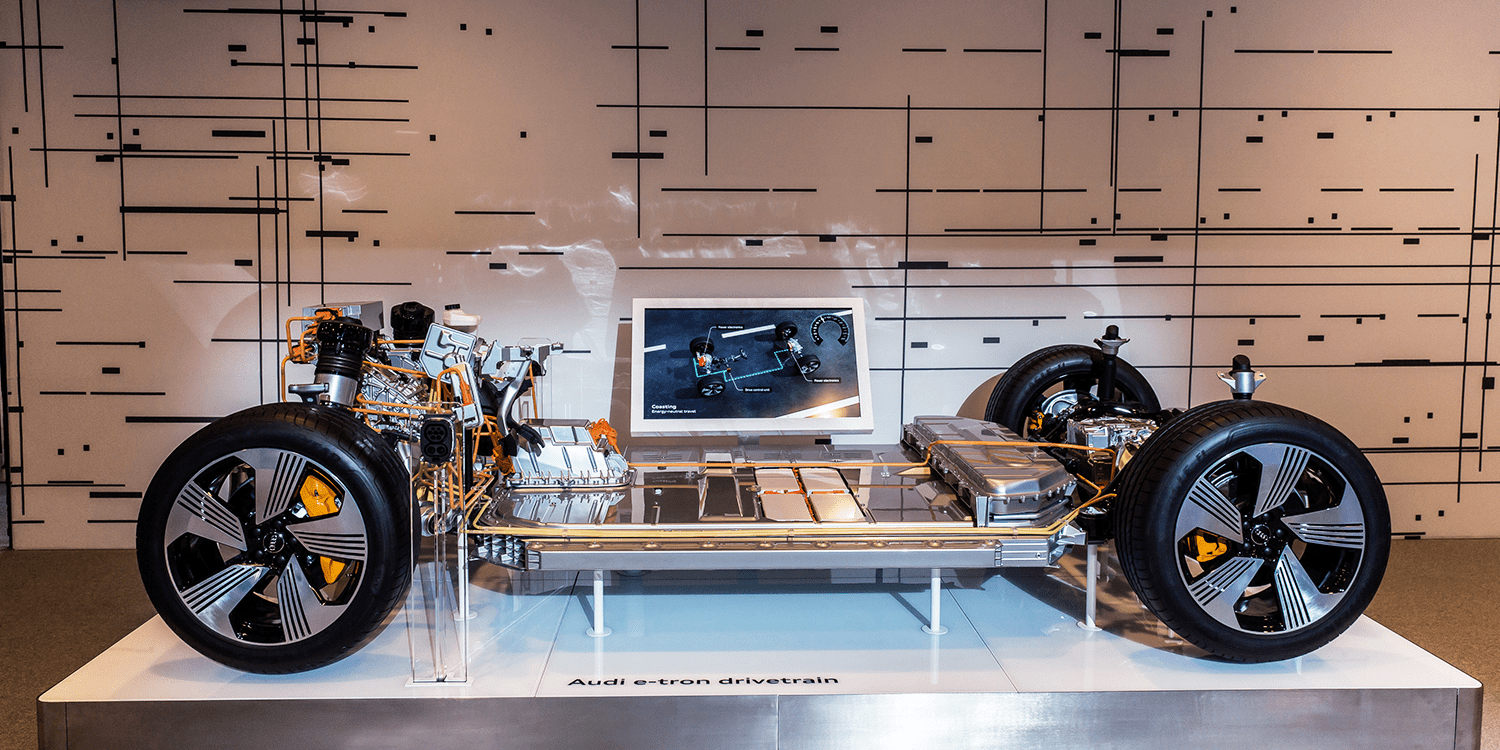 Detailed information is also available on thermal management. A cooling system made of flat aluminium that is divided into small chambers, ensures continuous operation of the battery. The heat exchange between the cells and the cooling system works with a heat-conducting gel pressed under each cell module. The resulting waste heat is evenly transferred via the battery housing to the coolant.

Audi had already published details of the charging abilities of the e-tron ahead of the San Francisco launch. While an AC charging capacity of 11 kW is fitted as standard, it can optionally be increased to 22 kW, not to mention a second type 2 charging socket. Audi is exploiting the opportunities of the three-phase power grid fully. However, they also put the DC charging capacity at a whooping 150 kW. Only Jaguar is approaching this in software steps, while the EQC from Mercedes remains at 110 kW. All Audi e-tron models to roll off the lines from mid-2019, will support Plug&Charge. The customer can also use the function to activate his charging system at home and we learnt that the function is supported for all charging modes (AC and DC), meaning this also includes the HPC ultra-fast chargers from IONITY.

Prices start at 79,900 euros in Germany yet it remains to be seen, what this standard trim includes. In the U.S. the e-tron will start at 74,800 dollars before subsidies, not including destination and delivery ($995) and taxes.

A few words on range which is 400 kilometres according to the WLTP cycle. For the e-tron this means it is a little below the Jaguar I-Papce that manages 480 km its 90 kWh battery. In addition, the e-tron electric SUV recuperates. Audi provides an example calculation: At a braking speed of 100 kph, the e-tron can recuperate with a maximum of 300 Nm and 220 kW of electrical power. 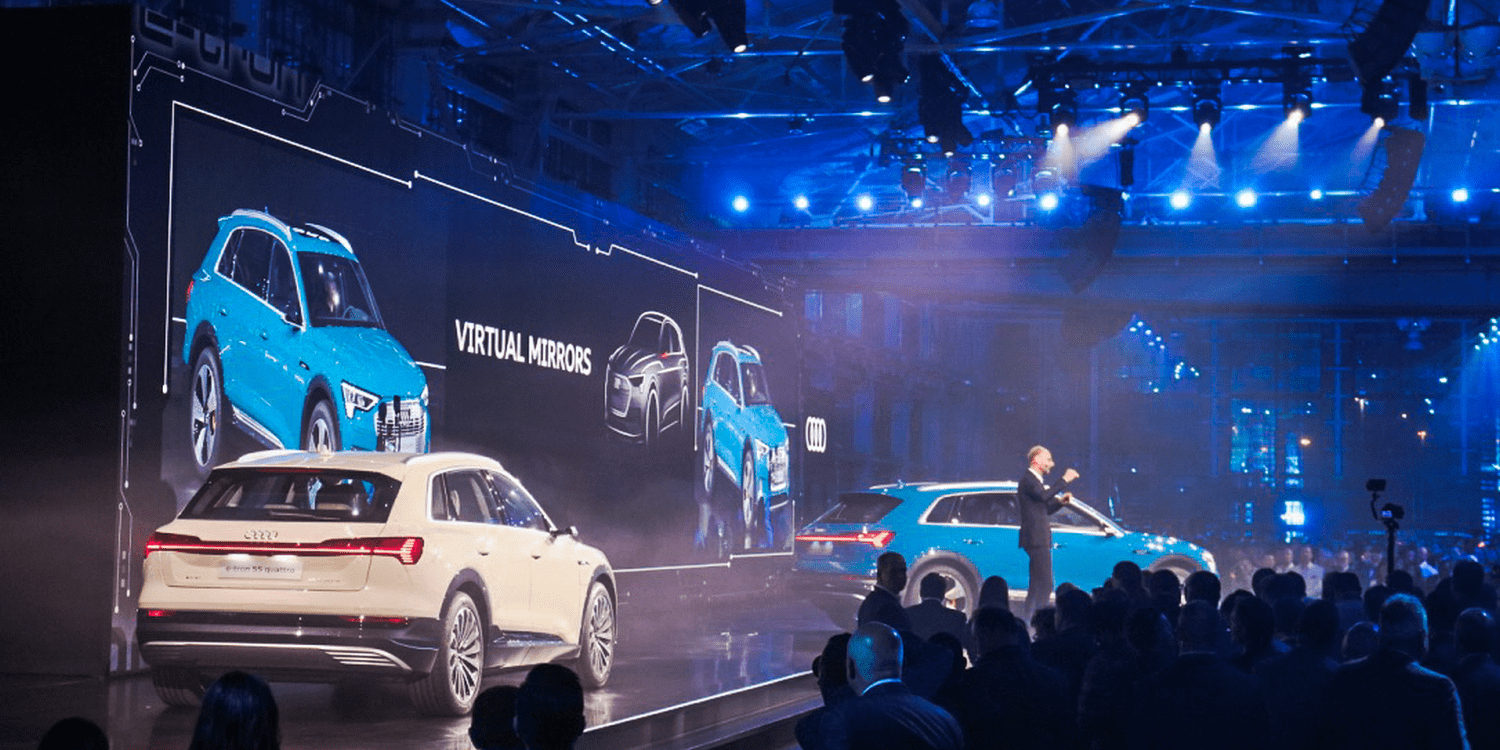 In terms of production, Audi has started the lines at their factory in Györ, Hungaria. They make the electric drive for the e-tron here. The electric car and the battery will then be assembled in Brussels and manufacturing has started already. Audi aims to deliver the very first e-trons before the year’s end.

Still, the e-tron is just the start reportedly. By 2019 follows the Audi e-tron Sportback and in 2020 expect the Audi e-tron GT. They will all use the same dedicated platform.

with reporting by Daniel Bönninghausen., audiusa.com (US pricing)

Cadillac to focus on electrification instead of diesel