The 2.4 tonne BEV is equipped with a completely newly developed drive system attached to an electric drivetrain on the front and rear axles. This is so that a four wheel drive system could be established. The EQC is being manufactured in Bremen, while the rear axle system and module for the front axle containing the electric motor and performance electronics are being supplied from Hamburg. The front system is designated for low to medium performance, while the rear electric motor is set for dynamics. Together, the a-synchronous motors bring a 300 kW performance to the road. The maximum torque was said to be 765 Nm.

Battery did not reinvent the wheel

The lithium-ion battery (408 V, 210 Ah) has an 80kWh capacity, comparatively clearly under the Tesla benchmark at 100kWh and the Jaguar I-Pace’s 90kWh. Even the compact Hyundai Kona Electro has a 64kWh battery. This marks the first compromise that Daimler had to make in manufacturing: the vehicle platform simply did not allow for more power storage. The liquid-cooled battery of the EQC is being manufactured by Daimler subsidiary Accumotive in Kamenz. The 650 kg battery is comprised of 384 cells, contained in two modules of 48 and four modules of 72 cells. The integrated cooling concept of the battery contains a heat pump and two PTC heaters, and also regulates the performance electronics, the electric motor, rotor and batteries.

The 80 kWh battery allows for a 450km range, where Daimler is calculating with 22.2 kWh per 100km. Experienced EV drivers will note that a more realistic performance is probably closer to 350 km. Once the battery is empty, it can be charged with AC up to 7.4kW, and it seems that Mercedes decided against a three-phase charging concept. With a DC charger, the process is significantly faster: In the USA and Europe, Mercedes will be using the CCS standard, while the Japanese and Chinese markets will see the CHAdeMO and GB/T standards, respectively. DC charging capacity is set at a maximum of 110kW, meaning that the battery can charge from 10% to 80% in about 40 minutes. The process was shown with a prototype at a FastNed station. 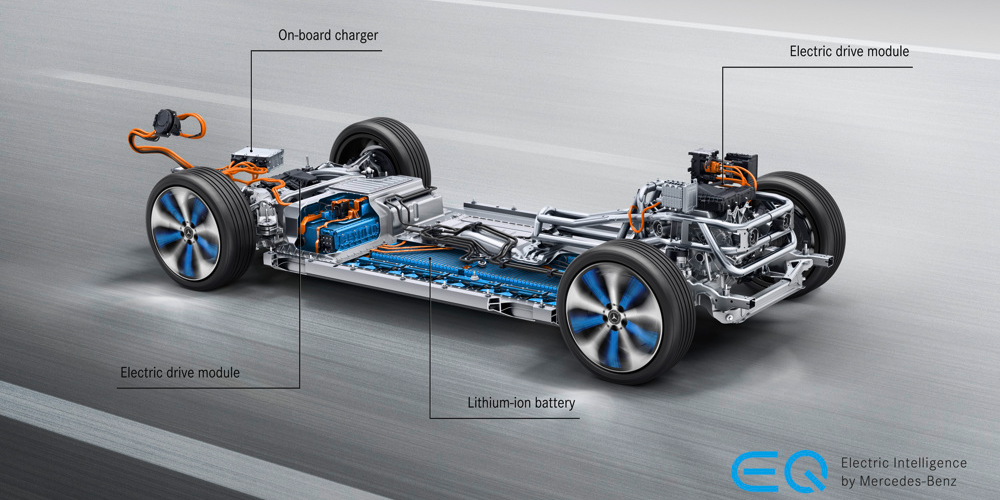 The navigation of the EQC points the way to charging stations of different operators, a feature which is also mirrored in their accompanying app. Access to charging stations is then achieved with the Mercedes Me Charge service, which will handle payment and processing, billing customers monthly. Compatibility with the IONITY automated HPCs was also kept in mind, and will be possible with the integrated tech. Mercedes is also offering additional services and intelligent charging solutions for companies and fleets. 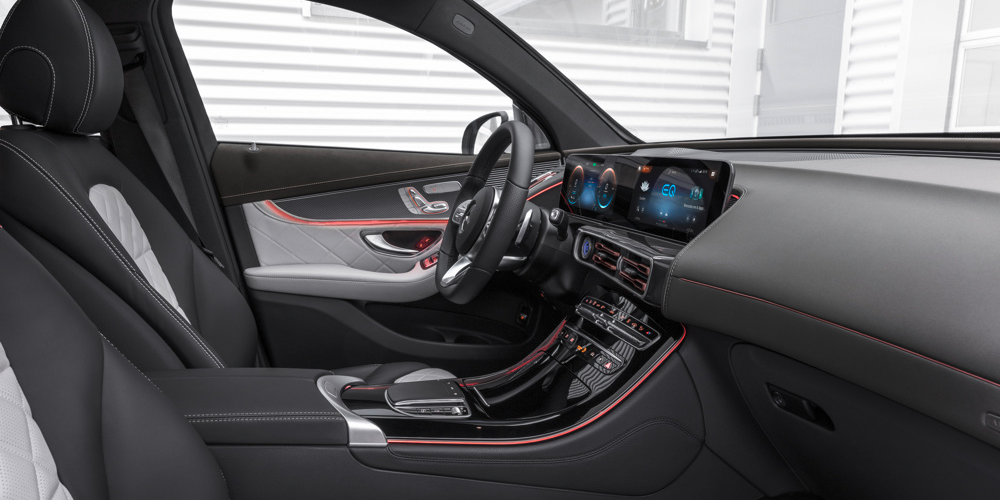 Mercedes integrated the EQC serial manufacturing into their factory in Bremen. There it will be produced next to their combustion models, such as the C-Class and GLC, on the same assembly lines. So far it is still unclear in what numbers the EQC will be produced, but we do know that production in China is already being planned with the Beijing Benz Automotive joint venture. In Beijing, a compact EV will also be produced alongside the EQC.

We will see the EQC hit the roads in Germany in the middle of 2019, for which price we do not know yet. Interested customers can register online to be kept in the loop, if they wish to, but a real ordering option has not been set.

with reporting by Daniel Bönninghausen.