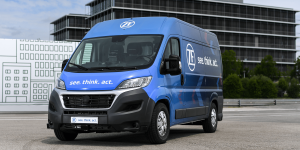 The automobile supplier ZF has presented a new electric transport an at the IAA Commercial Vehicles, which will use Level 4 autonomous driving functions for last-mile transportation. Serial production is set to begin in two years.

More and more suppliers are entering the market for electrically powered package logistics vehicles. Now ZF is presenting their own concept, as well. Performance data has not been issued for the vehicle, as the manufacturers are more interested in exploring the possibilities of intelligent networking, autonomous driving functions and electric motor systems, as well as serial production of these features. The vehicle will then eventually add features such as a “follow me” mode, so it can autonomously support delivery staff with their work.

The ZF leadership is convinced that autonomous driving technology will break through fast in the utility vehicle branch than with personal vehicles, citing lower operation costs :”The cost, safety and efficiency benefits for customers will make a difference here.” Particularly last-mile deliveries are of interest to the manufacturers.

What we do know about the ZF Innovation Van so far, follows: The technological model is based on the high speed processor ZF ProAI, as well as a sensor set including a camera, radar and lidar system for navigation. Thanks to Level 4 autonomous driving capabilities, the transporter can independently maneuver through urban areas. Adding to the autonomous driving capacities, ZF stated that the van can “stay in its lane even if without road markings, recognize both traffic lights and road signs and react to sudden hazardous situations. In addition, the Innovation Van can detect and drive around obstacles such as double-parked vehicles.”

The “FollowMe” function is probably the most innovative feature for a vehicle of this size: using a tablet running an app as a remote, the vehicle can autonomously follow the delivery person as if it were on a “digital leash”. The driver can also send the vehicle ahead or tell it to meet them somewhere, in which case the vehicle will enter the designated area and look for a parking spot.

ZF is already engaged in concrete talks with multiple customers, according to their statements. The concept is proving popular so far. In the next five years, ZF announced, they will also be investing more than 12 million euros in the branches of e-mobility and autonomous driving.