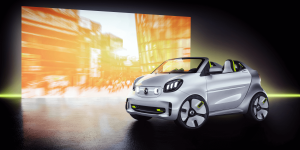 Smart is celebrating their 20th birthday at the Paris Motor Show with their new show car Forease. The electric concept is based on the Smart EQ Fortwo Cabrio, and has been announced to showcase the future direction for the company.

The concept visually reminds us of the Crossblade, which was a concept that was developed into a 2,000 limited production. Aspects of the Smart Forspeed from 2011 also went into the Forease. Compared to the Vision EQ Fortwo from last year, this concept looks significantly more production-ready.

According to Smart, the Forease is more than just a concept. Looking to develop more electric vehicles, Smart will rebrand themselves as an EV manufacturer in the near future. In Europe, this step is planned for 2020, while the brand is already fully electric in North America.

Starting on Monday, this development will be taken over by Katrin Adt, who is taking over the position from Annette Winkler who had been in the position for the past eight years. Winkler, who has worked as manager at Daimler for 23 years, will be moving on to a position with Mercedes-Benz South Africa.

Elon Musk steps down as chairman of Tesla

PSA reveals details to the planned JV with Punch Powertrain