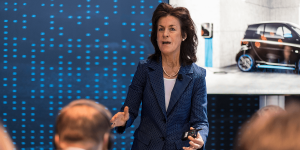 Annette Winkler will step down from her post as Smart CEO, handing over responsibility for Daimler’s small car business after eight years. A successor has not been appointed yet but Winkler will only leave on Sept, 30, leaving it to the next generation to complete the brand’s electrification.

Annette Winkler has worked for Daimler for 23 years, 8 of which she spent at Smart. She will be appointed to the supervisory board of Mercedes-Benz South Africa effective Sept. 1, 2019. On her decision to leave, the press release reads Annette Winkler saying: “One of the key responsibilities of every executive is to pass on leading positions to the next generation at the right time. And that time has now come – with the clear focus of smart as a fully electric urban-mobility brand and with the decision to develop the Hambach facility into a plant for fully electric vehicles within the Mercedes-Benz production network.”

Said Hambach facility is turning into an EV production hub for Daimler. The German corporation is planning to use the Smart factory in French Hambach to construct a Mercedes compact model of the EQ brand and to invest 500 million euros reportedly.

Also Smart falls into the wider electrification strategy at Daimler, and their models had been put under the EV label EQ some time ago already (we reported). The decision to fully electrify Smart had been made first in the States and Europe has followed shortly after. On the continent, Mercedes will flick the Smart switch by 2020.