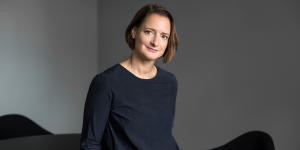 Daimler has appointed Katrin Adt to lead the Smart brand into its electric future as she will succeed Annette Winkler this September. Like Winkler, Adt is a Daimler veteran and has held leading positions since 1999. Her challenge will be to reverse the trend of falling sales during the time of transition.

Smart’s decision to turn into an all-electric brand in all markets had been taken first in the US market. While this move is likely to make them future-safe and to position them firmly within Daimler’s EQ network, it has led to falling or stagnating sales in the short-term, i.e. sales of the Fortwo ED has fallen from 115,900 in 2009, to 95,000 in 2017. However, it was Winkler who had led Smart to become more profitable overall.

In Europe, Daimler will flick the switch to run smart fully electrically in 2020 (we reported). Moreover their Hambach facility is already preparing to become a hub of electric car production within the wider Daimler EQ network and the Hambach factory has been producing the electric Smart Fortwo for some time now (we reported).

For Katrin Adt as successor to Annette Winkler her new role will be not only steer the transition but to increase sales. Britta Seeger, Member of the Board of Management of Daimler for Mercedes-Benz Cars Sales points out: “Katrin Adt has years of international experience. With her experience in various management positions in sales and marketing and the companywide management culture initiative Leadership 2020, she will steer smart into a successful future.”

The decision to let go of the reins at Smart had been an amicable one with Winkler saying “one of the key responsibilities of every executive is to pass on leading positions to the next generation at the right time” reportedly.

Winkler will step down from her position as head of smart after eight years on September 30, 2018. She will join the Supervisory Board of Mercedes-Benz South Africa as of January 1, 2019.