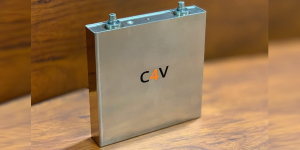 As the prefix “semi” suggests, the cells are not completely solid. More than 80% of the liquid electrolytes were replaced by a solid electrolyte, so that a semi-solid state is achieved in the cells, according to the manufacturer.

The current version has an energy density of 380 Wh/kg and 700 Wh/L, however this is not the end of the line for the manufacturer: In the next six months, C4V is looking to further increase the performance to 400 Wh/kg and 750 Wh/L. Afterwards, process optimization will take place before the product is commercialized, and production of the semi-solid-state battery cells begins.

The US American company explained that the new cells would increase the range of electric vehicles by 70%. Furthermore, they could be constructed without cobalt and make batteries more accessible, compared to the current construction and material requirements.