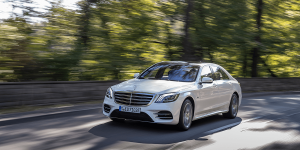 The third generation of the prime plug-in hybrid from Mercedes-Benz is due to at dealerships this month and can be ordered from today. Prices for the S 560 e PHEV start at 96,065 euros and include a new 13,5 kWh battery that allows for 50 km of electric driving.

Power for the Mercedes S 560 e PHEV is provided by the V6 gasoline engine with 270kW with the EQ Power drive adding another 90kW for a combined 350 kW. The battery is the actual novel part though, not so much in range (50 km is pretty standard for a plug-in hybrid) but in its make up.

For the first time, Daimler has used a pack made by their subsidiary Accumotive. They used a new cell chemistry with lithium-nickel-manganese-cobalt (Li‑NMC) which makes for a cell capacity of 37 Ah (previously 22 Ah). Despite an increase of around 50% in icapacity, the battery of the new S-Class PHEV is smaller than its predecessor.

With a water-cooled on-board charger with a capacity of 7.4 kW, the battery can be charged from 10 to 100 percent in approx. 1.5 hours at a Wallbox. The same is possible in around five hours at a conventional socket.

The Mercedes S-Class PHEV 560 e is due to arrive before the year’s end.