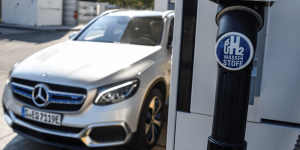 Mercedes is applying its fuel cell technology in real-life for the first time as the GLC F-Cell is on its way to Japan and Germany. Due to the high price of the plug-in hybrid that combines both hydrogen and battery-electric power, only selected clients will get the cars in exchange for a fee. Yet, this is just the start of a range of FCEVs Daimler plans to build around a new, modular system.

For the moment, Mercedes is looking to make no more than a four-digit number of the GLC F-Cell. The customers chosen to try the plug-in ahead of the market launch in 2022, must pay a monthly fee of 799 euros.

Clearly this latest model is still under development. And indeed, Mercedes is hiding a joker up their sleeve – a modular fuel cell system designed to be used in various vehicle types. Jochen Hermann, Daimler’s chief developer for electric drives told Automobilwoche to expect a whole range of hydrogen-powered vehicles from 2022. Until then, scalability and cost, obviously, are on top of the developers’ agenda. A first contender for Mercedes’ fuel cell system is the city bus eCitaro, Hermman added.

So for now, the GLC F-Cell will remain a rare sight on the roads, even in the test markets in Germany and Japan. The reason Daimler opted for these countries to start with are easy to guess. Japan is the most developed market when it comes to hydrogen and FCEVs thanks to Toyota’s Mirai. For Germany, it is simply the carmaker’s home market.