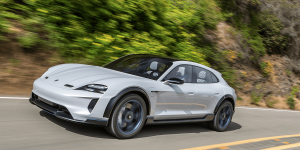 The Mission E Cross Turismo, first introduced as a concept at this year’s Geneva Motor Show, will go into serial production as a derivative model of Porsche’s first electric vehicle, the Taycan.

CEO Oliver Blume officially proclaimed that the board has given the green light for the serial production of the concept Cross Turismo. For the vehicle alone, another 300 jobs will be created at the Zuffenhausen factory, where it will be built. This is in addition to the 1,200 jobs that are being set up for the production of the Taycan.

The 4.95 metre long concept with all wheel drive is a combination of station wagon, sports car and SUV. Sort of an electric off-road station wagon. Porsche dubbed the design a Cross Utility Vehicle.

The Mission E Cross Turismo is powered by two electric motors with a combined performance of 440 kW. The spring from 0 to 100 km/h is done in a mere 3.5 seconds. The BEV has a range of more than 500 km according to NEDC standards. Thanks to an 800 volt architecture, the 90 kWh battery can be charged to power a range of 400 km in about 15 minutes. The concept is thus solidly prepared for charging on the German HPC charging network Ionity is building. The vehicle is also capable of charging inductively.

At the same time, the Zuffenhausen-based company has started the pre-serial production of their first electric model. A good year before the official begin of sales for the Taycan, production kicked off with 100 employees and a small pre-production series to iron out any last issues before mass production launches. The decision to launch serial production of the vehicle was made back in 2015, making for a full four years between announcement and sales launch next year.

Porsche’s electrification strategy has them investing six billion euros by 2022. Originally, the number had only been half that. In early February, Porsche CEO Oliver Blume announced the company’s intention to double their planned investment in the development and construction of electric vehicles. 500 million euros alone are earmarked for the development of variants and derivatives of the Taycan, with a whole billion to be used to electrify current vehicle models.