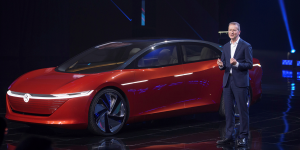 Ford and VW are already cooperating in the field of utility vehicles, but now the two automobile manufacturers are planning a far more extensive cooperation in the areas of electric mobility and autonomous driving. The plan is to work together to lower development costs for future technologies.

This may provide an entry for Ford to take advantage of VW’s MEB platform, while VW could stand to recoup their development costs more quickly.

This will take place at least one or two years after the initial VW vehicles are released, however, as Volkswagen CEO Herbert Diess does not want to lose the technological advantage, according to media reports. The negotiations for a bundling of the automakers capacities in terms of EV development and autonomous driving have already been ongoing for some time. In the board meeting on the 16th of November, the final decisions will be made to set the plans in motion.