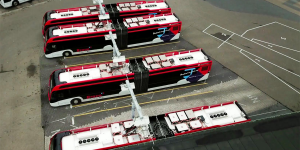 Heliox has been chosen as the charging infrastructure partner for the 40 electric buses ordered by Unibuss in Oslo. The company will be installing 40 fast charging stations for buses at one of Europe’s largest bus depots.

The plan is set to be put into action over the next four months, as the buses are planned to launch in spring of 2019. For the installation, Heliox aims for no less than 9.8 MW of capacity for the electric bus charging infrastructure.

In chargers this means, Heliox will be installing a total of twelve electric bus stops with capacities of up to 300 kW each. The installed charging system with an interoperable OppCharge interface is located on the roof of the electric buses. These can charge the vehicle batteries in two to five minutes.

For Heliox it is not the first large project. They recently set up a convenience and depot charging network with 13 MW for 100 electric buses in Amsterdam.

Oslo is considered the greenest European capital for 2019, and plans to implement environmentally friendly city transport, which includes battery-powered buses. Starting in summer next year, a total of 115 electric buses will be operating on the roads in and around the Norwegian capital thus forming one of the largest electric bus fleets in Europe to date.