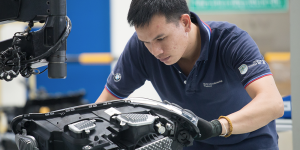 BMW will produce high-voltage batteries for plug-in hybrids in Thailand together with the Dräxlmaier Group. The batteries, made in a new production facility near BMW’s Rayong plant, will help power the PHEV versions of the 5 and 7 series and the X5.

Dräxlmeier is a longstanding supplier to BMW (since 1966) and will set up and manage the production in Thailand. BMW will be responsible for adding know-how and give special training to its Thai employees at various locations in Germany.

From 2019 onward the new production facility located in WHA Chonburi Industrial Estate will produce both battery modules and the battery itself. They will feed into BMW’s growing local production of plug-in hybrids. To date, the carmaker’s Rayong plant is responsible for four PHEV models. They will be based on the 5 and 7 Series, and BMW X5 in the first phase from 2019 onward.

Christian Wiedmann, President of BMW Thailand expects their output to include the whole region then when saying: “The start of local battery production will enable us to better respond to growing demands for electrified vehicles across ASEAN markets.” He added that the Rayong site had already served BMW as “automotive production hub in the region”.

Together, BMW and Dräxlmaier plan to invest over 400 million baht in Thailand and the region. Wiedmann added that for BMW Thailand “we have already planned and approved for government’s incentives by Thailand’s Board of Investment (BoI) to further invest over 700 million baht for more BMW Plug-in Hybrid models to come.”

BMW are not the only ones looking into battery pack making in Thailand. Bangkok is already part of Daimler’s global network of production hubs and Toyota reportedly plans to build a battery factory in the country to produce power packs for its hybrid vehicles from 2020.