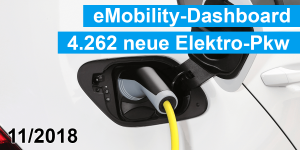 This November the German authority KBA registered an exact 4,262 electric cars in the country. According to our eMobility Dashboard this means EV sales have reached a record high as this translates to plus 40.6 per cent compared to the same month last year.

Also when looking at the monthly comparison, sales have increased in November as 872 more electric cars were added to the Auto nation last month than in October 2018.

Given the 40.6 per cent plus in electric car sales, it might as well be that prospective buyers have begun to simply jump the “bridge technology” plug-in hybrid to go straight into EV land but this is speculation until further analysis.

When looking at applications for the German plug-in grant known as ‘Umweltprämie’, data from the Federal Office for Economic Affairs and Export (BAFA) painted a more balanced picture: the authority has received a total of 87,884 applications for the environmental bonus throughout November, 30, 2018. Of those, 55,368 were for purely electric cars, 32,488 for plug-in hybrids and 28 for fuel cell vehicles.

Aston Martin to retrofit their classics with electric drive