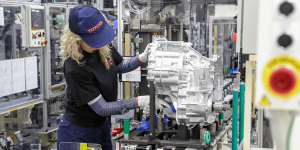 The company’s investment plan will roll out over the next four years. ZF is putting particular focus on their plant in Saarbrucken – because until now, the plant has been focussing on conventional transmission systems and the company makes no secret of the fact that they see this market shrinking in the immediate future. ZF expects the expansion of electromobility to continue. Stephan von Schuckmann, head of the car transmission technology division says, “We need to shape and moderate this change.”

To meet the challenges posed by electrification, 800 million euros will be invested in their Saarbrucken plant to get it ready for the transition from conventional to electric motorisation. The funds are expected to flow into production facilities and systems, infrastructure and their supplier network. “The share of hybrid drives in production will increase tenfold over the next few years – from five to 50 per cent,” says CEO Wolf-Henning Scheider. He describes the increasing market penetration of further developed hybrid drives as an opportunity, and asserts that these solutions are “more than just a bridge technology”. Scheider is convinced that hybrids with longer ranges between 80 and 100 kilometres could complete the majority of all journeys electrically in future and thus help e-mobility to achieve a more rapid breakthrough.

Of course, ZF not only focuses on the passenger car market but also on the commercial vehicle sector. In October of this year, we reported that ZF was facilitating technology to convert diesel buses into electric vehicles with its e-troFit solution.

At the IAA trade show in Frankfurt, Dr Mark Mohr, Head of commercial vehicle technology at ZF, showed electrive.com that they already have hybrid and electric transmission systems for vans, small to large trucks, city buses and utility vehicles. For longer range vehicles they have been focusing more on hybrid transmission systems with 10-20 per cent capacity running on electric systems so that trucks and tour buses can drive in inner-city zones without emissions. When asked about larger, long-distance vehicles in the future, Dr Mohr said, “There are a lot of different concepts, for us overhead lines still seem to be an option, and fuel cell vehicles are a real option too. We see ranges of 400 km (for heavy-duty vehicles) being possible with batteries by 2020-2025.”