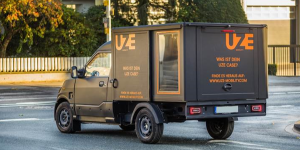 The Deutsche Post subsidiary StreetScooter has received yet another major order for its electric vans. German startup UZE Mobility has just bought 500 of the StreetScooter models Work and Work L and initially wants to use them in German cities as car-sharing vehicles – for free.

UZE Mobility is German startup now based in Aachen but planning to move to Bremen at the beginning of 2019. The company wants to rent the StreetScooter models by app to private users having to transport bulky goods. Most ingeniously, UZE’s business model is based on advertising and data gathering, so that clients may drive the electric vans for free, although not right from the start though, as UZE now specified.

To recap, UZE Mobility, which is a spin-off from RWTH Aachen University like the original StreetScooter, reportedly strives for a free, that is data-funded rental service for its customers. In addition to selling advertising spots on screens which can be adapted depending on location (in the real world, not online), other “business models based on blockchain technology” will also contribute to refinancing. The founders are intending to sell data that the StreetScooter vans collect, for example on the condition of the roads, to municipalities or interested parties.

In the course of the large order now made public however, UZE Mobility specifies that it will not start directly free of charge for customers, but said they will offer services well below conventional market prices right from the start of their pilot projects.

Early investors are on board such as Daimler’s largest sales partners in Germany, the LUEG AG. We reported that they would invest 1 million euros in the start-up and they are now also joining UZE as an operational partner.

So it is no wonder that UZE boss Alexander Jablovski believes, that they will need more StreetScooter EVs in the foreseeable future, also because he is convinced that their  business model “works everywhere in the world”.

According to the company, the StreetScooter was chosen because car sharing is an extremely demanding application for an electric van. States UZE: “The StreetScooters are the ideal vehicles for our business. They have enough range, are robust and the operating costs are low. Above all, they have already proven themselves in practice.”