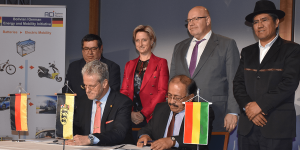 The planned joint venture between the state-owned company YLB Yacimientos de Litio Bolivianos and the German ACI Systems Alemania (ACISA) has now been officially founded at a reception in Berlin.

The JV will trade as YLB-ACISA and is considered of strategic importance for both Bolivia and Germany and/or Europe.

Moreover, they specified capacity and plan to produce 30,000 to 40,000 tonnes of lithium hydroxide annually in the Bolivian salt lake Salar de Uyuni from 2022 and there are plans to further expand capacity. Estimates suggest the required investment for this project currently amount to 300 million euros.

The Bolivian state-owned company holds a majority stake of 51 percent, while the German ACI Systems will be responsible for the final choice of tech and implementation partners, up until the construction of production lines to “ensure innovative, efficient and sustainable production”.

In fact, the technological expertise had made the cooperation possible in the first place. Estimates suggest that the salt lake holds around 10 million tons of lithium, making it one of the world’s largest lithium deposits. Yet, it has proven difficult to extract lithium from the residual brine so far. The latter comes from existing evaporation basins, which were constructed for the production of potassium chloride and lithium carbonate. With previous technologies, the residual brine was essentially useless and therefore had to be discarded. Thanks to ACISA’s new process however, it will now be utilised to produce lithium hydroxide that is suitable for use in electric vehicle batteries. For this, the company has teamed up with partner companies such as K-UTEC AG Salt Technologies.

According to the press release, the new process also takes into account sustainability, by cutting down on water consumption and integrating solar power for example. About 1,000 direct skilled jobs are to be created.

Moreover, the partners look to establish a further joint venture to manufacture cathode material and battery systems in Bolivia and Germany.