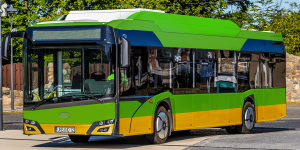 The public transit operator of the Polish city of Poznań ordered 21 electric buses from Solaris, including 15 articulated and 6 standard length. The city expects delivery by the end of February 2020 and took extra care of charging opportunities.

Operator MPK of Poznań will pay Solaris over 70 million złoty (over 16 million euros) for the 21 electric buses. They included infrastructure for the electric vehicles to charge via pantograph at up to 560 kW.

Moreover, the models supplied to Poznań will have plug-in charging sockets on both sides of the bus, which will ease recharging of several vehicles simultaneously. Therefore, MPK has decided to equip the bus depot at Warszawska street with an overnight plug-in recharging station. 10 double-stand stationary devices and three mobile charging stations will make it possible for the operator to concurrently recharge all their 21 electric buses.

In the case of the 12-metre buses of type Urbino, the batteries will hold 116 kWh. The longer articulated units carry a battery pack of 174 kWh.

So far Solaris has supplied more than 100 battery buses to buyers in Poland, and almost 90 more such buses have been commissioned. Electric buses have been successfully applied in Warsaw, Jaworzno and Cracow. Poland wants to procure 1,000 electric buses by 2020 reportedly.