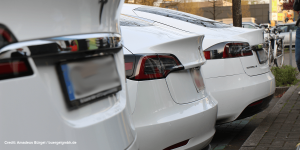 Tesla has hired the former Walgreens human resource head Kathleen Wilson-Thompson and the Oracle founder Larry Ellison as new independent directors to join their board of directors. Furthermore, Tesla has founded a leasing company in China, as well as having manufactured a total of more than 155,000 Model 3.

With the two new appointments to the board of directors at Tesla, the EV manufacturer is fulfilling a stipulation made in the settlement with the US Securities and Exchange Commission (SEC). The settlement arose as a consequence of a controversial tweet by Elon Musk regarding a possible withdrawal from the stock exchange. In the settlement, the company and Elon Musk had agreed to each pay 20 million dollars. In addition, two new independent directors were to be appointed to the board and a new chairman had to be selected. In November, Tesla appointed Robyn Denholm as the new chief supervisor.

Tesla has also set up its own leasing company in China, which was registered with the National Enterprise Information Publicity System of China a few days ago. The new leasing and consulting company from Shanghai launched with 30 million dollars in capital provided by Tesla. The managing director is Zhu Xiaoteng; the current Tesla boss in China.

Finally, according to Bloomberg’s “Model 3 Tracker”, the Californians have produced over 155,000 copies of Model 3. Currently, about 4,600 Model 3 are estimated to be rolling off the assembly line every week.

Renault to expand in China with JMEV