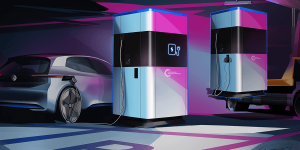 ++ This article has been updated. You find all recent developments below. ++

The German vehicle manufacturers plan to use the charging stations on public parking spots in cities, industrial areas or as a temporary charging point for major events, as the charger is entirely independent of the electrical grid. The module allows for DC charging with up to 100 kW and has two slots each for DC and AC charging, making it possible to charge a total of four vehicles at once. The manufacturers added that e-bikes can also be charged on the system, which they say carries enough power to charge 15 vehicles.

A connection to the power grid can also be set up if the charger needs to remain at a location longer than for a few charges, where the station then charges itself with up to 30 kW via an AC connection. “This enables charging points for electric vehicles to be set up quickly and simply, without any structural changes or major financial outlay. The battery pack in the charging station can be recharged around the clock thanks to the direct power connection. This time-independent recharging, and therefore buffering of power, also considerably reduces the strain on the power supply at peak periods,” according to the manufacturer.

First prototypes are planned to be distributed for testing in the first half of 2019, with the Wolfsburg home base of the company likely receiving the first. The chargers are also part of a city-wide expansion of the charging infrastructure and will expand to other cities beginning in 2020. The 360 kWh lithium-ion battery itself is based on the Modular Electric Toolkit (MEB), meaning it will share battery modules with the Volkswagen I.D. series vehicles, as well as other MEB models.

Update 05.03.2019: At the Geneva Motor Show, VW presents the near-series design study of the mobile quick-charging column. Series production of the first quick-charging columns, which are also used in other cities and communities, begins at the Hanover location in 2020.