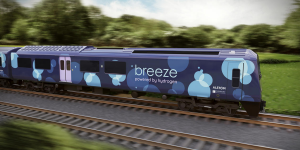 In cooperation with Eversholt Rail, the French group Alstom has presented the design of a new hydrogen train for the British market. The H2 train, which was developed under the code name Breeze, is the conversion of an existing train.

Alstom is planning deployment of the train in Great Britain starting in 2022. The conversion will be based on Class 321 trains, which, according to the Group, are ideally suited for this purpose.

The conversions are to be carried out at the Alstom plant in Widnes. “Hydrogen trains offer an ideal solution for routes which are unlikely to benefit from electrification,” says Nick Crossfield, Managing Director of Alstom UK & Ireland. The innovative technical solution will allow them to be quickly ready for use on the UK lines.

Update 04 August 2020: After Alstom last year presented the design of a new hydrogen train for the British market in cooperation with Eversholt Rail, the partners have now invested another million pounds in the H2 train programme called Breeze. The Breeze hydrogen trains will be mass-produced at Alstom’s Widnes Transport Technology Centre, creating more than 200 new jobs and the first trains are expected to be operational in 2024.

The investment will be used to prepare the factory near Liverpool for the production of the H2 trains, “which is fast becoming the UK’s premier centre for train modernisation”, Alstom announced. The train is to be the first in class 600. In Great Britain, all train types are classified with three digits. Trains with alternative propulsion systems will be classified as 6xx – the Alstom train will, therefore, be the first model to carry the 600.

Alstrom plans to convert the class 321 electric railcars from Eversholt Rail to hydrogen technology. The core technology to be used will be the same that Alstom already uses in its iLint vehicles in Germany.