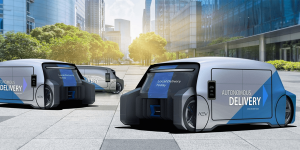 The Australian company AEV Robotics presented a flexible concept for autonomous electric vehicles at CES. The basic flat construction – also known as a skateboard – can be used to mount various superstructures – so-called pods – for taxis or delivery vans, for example.

The modular solution is based on a floor platform that contains the battery, the electric motors and the other vehicle technology. The Australians have no intention of achieving long ranges: They can choose between 15 or 30 kWh of battery capacity – enough to make it through the day. After all, the relatively small batteries save weight. AEV CFO Shane Ambry also spoke of using inductive charging for vehicles with waiting periods, such as taxi services. The start-up currently has more than 30 employees and had already built a small car for the Japanese company Teijin by the end of 2018, the report continues.

The idea of combining a “skateboard” with a drive train and all relevant control elements with different pods is not exclusive to the company, however. For example, with the Intelligent Dynamic Driving Chassis (IDDC), ZF offers a flexible platform for autonomous electric vehicles, which also forms the basis for Rinspeed’s new urban mobility concept Snap. At last year’s CES, however, Toyota presented its vision of the mobility of the future with the versatile e-Palette concept vehicle. VW also presented an autonomous electric study of this kind named Sedric.