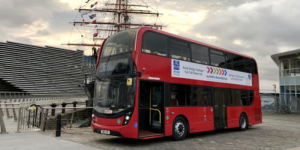 British bus manufacturer Alexander Dennis Ltd. (ADL) is expanding its range of double-decker buses to include a model with fuel cell drive. The electric drive axle of the hydrogen bus comes from Germany’s ZF.

The electric portal axle will be installed in a model that ADL has developed by on the basis of its Enviro400 series. In the fuel cell configuration, hydrogen powers the two electric wheel hub motors of the electric portal axle. In addition to AxTrax AVE, ZF also supplies the inverter, the electronic control unit EST 54, and the appropriate control software.

ADL has spent two years perfecting the fuel cell model. According to ZF, it was involved as a partner right from the start. A prototype has already absolved convincing performances in field tests in several British cities, according to a statement by the German company.

First introduced in 2012, the AxTrax AVE drive axle is now in worldwide demand – for the NewFlyer, Optare, and in-tech, among others. “It covers a wide range of applications because it can be operated as a fuel cell configuration as well as a hybrid or with lithium-ion batteries purely electrically,” says the manufacturer. In addition to the drive power – a total of 250 kW up to a maximum axle load of 13,000 kilograms – the axle features a compact design that gives manufacturers great freedom in designing the passenger compartment.