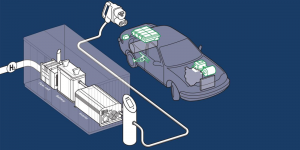 The British company AFC Energy has demonstrated a network-independent charging solution for electric vehicles under the name CH2ARGE. A hydrogen fuel cell system provides energy to charge a connected battery that lastly delivers the charge for the electric car.

The idea is not bad at all – to charge battery-electric vehicles with a system based on hydrogen thus becoming independent from the grid. Naturally, it enables a mobile charging solution that AFC Energy said could also be easily packaged in a shipping container and used temporarily, for example at remote locations or events.

Technically, CH2ARGE contains AFC’s small hydrogen fuel cell solution along with an inverter that transfers the energy generated by the fuel cell to the EV charger. So hydrogen stored in tanks on site is used by the fuel cell to charge the 40 kW battery which then delivers its energy to the electric vehicle. Essentially, the system is compatible with all electric car models and smart charging functions and can supply enough power to charge an electric vehicle to 80 per cent in one hour, the manufacturer says.

In recent years, AFC Energy has specialised in marketing an alkaline fuel cell system that provides clean power for off-grid applications. The technology developed in the UK is currently being used in industrial gas plants to generate electricity, as an alternative to diesel generators and as an energy source for local electricity needs.

For the CH2ARGE system, the company is looking for manufacturers and OEMs to commercialise the fuel cell charging system.