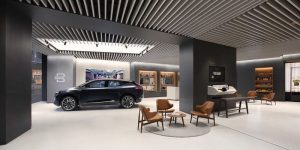 Byton opened its first brick and mortar store in Shanghai this weekend and plans to expand to 30 locations by the end of the year. The Chinese EV startup will use the stores to set up and increase its online sales and service network.

Byton will use a hybrid direct sales model and combine online channels such as their smartphone app with offline channels, such as the new ‘Byton Places’. The next store is to be opened in Chongqing in the middle of the year, after which the stores will open in rapid succession across the rest of the nation, including Beijing, Guangzhou, Shenzhen, Nanjing, Hangzhou and Chengdu. The opening of stores in Europe and North America is scheduled for 2020.

According to Byton, their new stores will function as brand experience centres, where employees stand ready to present products and advice on sales, distribution and various services. “In the next expansion phase, additional services such as pre-sales, sales, vehicle delivery and after-sales will be offered in individual Byton Places, while a service centre will be limited to vehicle delivery and after-sales offers,” according to the press release from the startup.

The establishment of the sales and service network will take place against the background of the forthcoming launch of their electric SUV M-Byte. The serial version of the debut battery-electric SUV will be presented in the summer before series production is to begin before the end of the year. Byton is currently already testing prototypes under real conditions. Currently, 100 vehicles are being tested on test tracks and in road traffic in various situations. The first electric cars are to be handed over to customers in China as early as the second half of 2019. Deliveries in the USA and Europe are expected to follow at the end of next year.