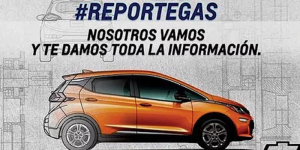 After a tapped gasoline pipeline exploded, the Mexican government closed several pipelines to combat fuel theft, leading to a nation-wide shortage of gasoline. Chevrolet Mexico immediately turned this into a marketing campaign for the e-model Bolt.

The Bolt was driven around to gas stations where gasoline supplies were noted and communicate via Twitter and Instagram – with the effect that many people showed interest in the Chevy Bolt and wanted to know more about it.

In Mexico, electromobility has been pushed forward by a rise in gasoline prices last year followed the hike this year due to the shutdown, and government restrictions on combustion engines to combat pollution. However, what is still holding the transition back is the availability of affordable electric vehicles.