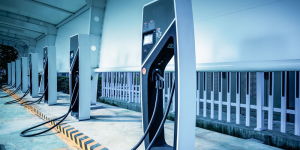 Manufacturers of DC charging stations have been experiencing particularly tight supply environments from Asia. This was reflected in a survey undertaken by our German colleagues at electrive.net and was similarly evident when looking at the kinds of strategies various purchasing departments are having to use. Significantly, infotainment, autonomous driving and electrification are all driving an increase in the use of semiconductors in vehicles.

For some time now, Mennekes has had to deal with delivery times that can sometimes take more than 12 months. As a countermeasure, managing director Volker Lazzaro recommends adjusting to the situation by means of long-term forecasts and special disposition strategies. He said that “One must continuously try to predict market development”. However, this only works as long as none of the components are discontinued. It can happen that the delivery of a component mounted on a circuit board is cancelled because the manufacturer no longer produces it. According to Lazzaro, this is particularly problematic when this period is shorter than the delivery time of an alternative component.

Although ABB did not want to answer detailed questions about specific delivery circumstances for power electronics, they did confirm that they do experience bottlenecks, “as with other manufacturers of charging infrastructure.” Apparently, electronics capable of dealing with 1000 volts are particularly affected, which has already led to delayed deliveries, as was explained to electrive.net by Frank Mühlon, Managing Director and Global Product Group Manager of ABB Germany. He said that he hopes this will be different in the future since the company has been able to react and align processes along the entire supply chain to address these challenges. For example, Mühlon says that “the pipeline was adjusted in advance” in order to cope with a predicted increase in demand. Another option would have been to access cheaper and more readily available goods from China but this option was not taken for reasons of quality and safety. Mühlon pointed out that the expansion of the charging post business is “by no means hindered in the mid-term” by supply bottlenecks.

The storage device manufacturer ADS-TEC is also currently confronted with “difficulties in the procurement of components in the area of power electronics”. However, they rely on the fact that their employees in the purchasing department have “good networks”. The spokeswoman for ADS-TEC said: “We are very well positioned here thanks to partnerships with suppliers.” ADS-TEC products have recently also been used as “charging reservoirs” in connection with fast-charging points.

Innogy, one of the largest operators of charging stations in Germany, did not want to comment on the subject in concrete terms for fear of giving the competition too much insight. What they could say, however, was that supply challenges only concern DC charging infrastructures. AC chargers – and thus the majority of charging stations – are not affected by the problem.

A scarcity of multi-ceramic capacitors

ZVEI, the German Electrical and Electronic Manufacturers’ Association and in particular, their PCB and Electronic Systems division, pointed to a general easing of tension, although they did not have concrete figures on the delivery environments of electronic components for charging station manufacturers. The shortage of electronic components that began in 2017 has seen certain improvement since the third quarter of 2018. This is mainly due to the somewhat declining economy, we were told by Christoph Stoppok, Managing Director of the trade association. He particularly sees bottlenecks in so-called multi-ceramic capacitors, which he said was unexpected.

While the share of semiconductors in smartphones, tablets, PCs and TVs will increasingly stagnate in the coming years, the use of semiconductors in the automotive sector is steadily increasing due to three megatrends. The first is connectivity, i.e. the installation of premium infotainment in the vehicle, the second is autonomous driving and the use of driver assistance systems, and the third is the electrification and increasing production of electric vehicles.

Strong growth in semiconductors in cars

Translated into English from an original article (in German) by Michael Nallinger on electrive.net