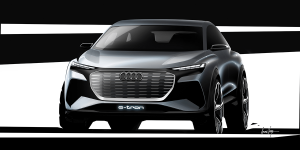 Audi is now offering a first official preview of its previously teased all-electric compact SUV based on the MEB Group modular system, due to debut in Geneva this March. The study now got the name of Audi Q4 e-tron concept and will go serial in 2020/21.

The new compact electric SUV was announced just days ago when a German publication described its positioning as a “somewhat finer and more expensive brother who is playing the Audi A3 compared to the VW Golf at the moment”.

The study that will now be known as the Audi Q4 e-tron concept was already teased at the Dutch market launch of the e-tron last month. Once it comes out in the next decade, the electric SUV will join the ranks of the Audi e-tron, e-tron Sportback and e-tron GT.