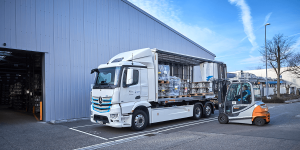 Mercedes-Benz Trucks has announced the next steps with its eActros electric truck after absolving 30,000 km of testing. Starting this spring, the German Logistik Schmitt will use the eActros in real-life three-phase operation.

These three testing phases of Mercedes’ electric truck will be carried out in the southern German region of Baden-Wurttemberg. The first phase will involve field tests of the 25-tonne eActros from spring 2019 onward with logistics company Logistik Schmitt who will conduct daily tours of approx. 168 kilometres in 3-shift operations. The second phase and third phases will involve larger models in comparative testing against catenary electric trucks that use overhead charging.

The eActros being tested have an architecture that is entirely based on the electric drive with a large proportion of specific parts, largely using the frame of the Mercedes-Benz Actros. The drive comes from two electric motors near the wheel hubs on the rear axle with an output is 126 kW each, and a maximum torque of 485 Nm each. This means that the driving output is on par with a diesel truck. The trucks lithium-ion batteries have a capacity of 240 kWh. A full charge takes between two and eleven hours (at 150 or 20 kW respectively) depending on the available charging capacity. Daimler claims the trucks have proven a reliable range of 200 km. 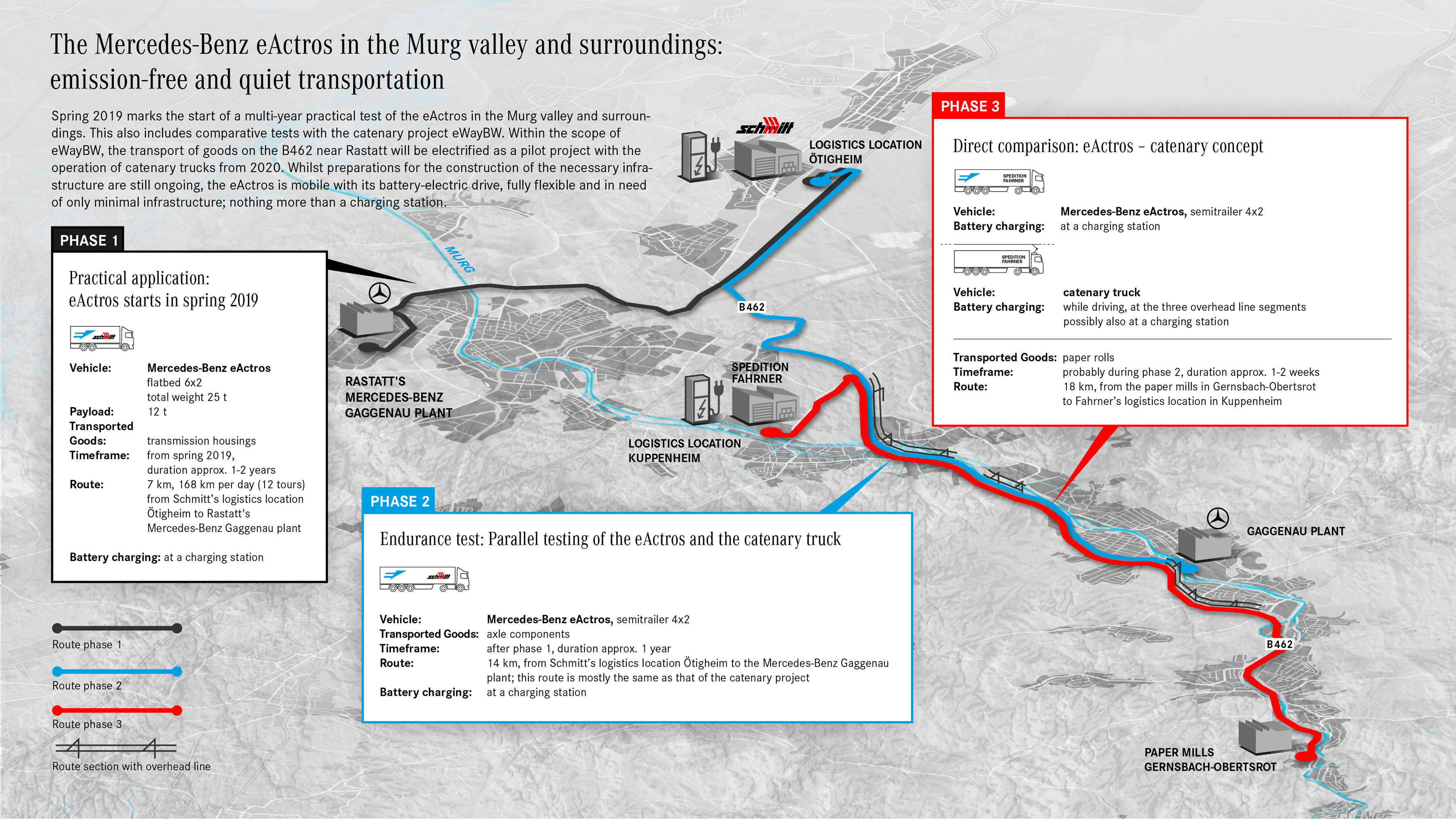 In the first phase of the eActros test operation, Logistik Schmitt is adopting an eActros with a swap body into the company fleet.  The batteries in the eActros will be charged when the vehicle is being loaded or unloaded using a mobile charging station. These eActros can transport up to twelve tonnes and can drive twelve tours a day.

In the second phase, the 25-tonne truck from the first phase will be replaced by an advanced version of the electric truck in form of a semitrailer tractor unit. These eActros will then be tested in parallel with the catenary truck. This is done in collaboration with what is called the eWayBW – a pilot project for the research of hybrid trucks electrically driven with the help of overhead power lines. On the test route in the German state of Baden-Wurttemberg, which will be the same ones used by the eActros, three sections will be electrified with overhead power lines. Since eActros semi will be comparable to the catenary trucks in terms of tonnage and range, and because the trucks will be largely following the same routes, both vehicle types can be tested for suitability in the same conditions.

The third phase of the project will simply require a direct comparison of the catenary truck and the eActros semitrailer truck when they run exactly the same route for one or two weeks for direct comparison.

Despite the involvement of catenary trucks in this pilot project, Daimler currently has no plans for catenary trucks. The company said that “Due to the high infrastructure costs involved, the company does not see potential in overhead lines at present – also in view of the rapid development of battery and fuel cell technology.”