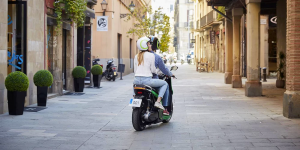 The Spanish e-scooter manufacturer Silence is moving beyond its previously B2B only approach to selling electric scooters to private customers as well. A limited sales run will start in Spain and the S01 carries over the removable and wheelable battery from the commercial model.

The first 500 units of Silence’s electric scooter can be pre-ordered against a deposit of 600 euros and are intended for Spanish customers and cost 5,995 euros each. Later the S01 model is to be sold at the price of 6,600 euros in other countries of Europe.

A unique feature is the exchangeable battery concept. Due to its capacity of 5 kWh, the battery weighs 30 kilograms. Unlike other electric scooters, the Silence battery is inserted from the side and boast specially designed handles that make it easier to handle the heavy battery pack. Most practically, the battery reveals a wheel system upon removal that essentially turns the package into a little trolley as you can see in the video below.

The comparatively high weight is also because the charger is already integrated. The cable only has to be unwound and plugged into a socket. And there is another special feature: an inverter is also integrated, which supplies 12 V and 24 V direct current as well as 220 V alternating current. This means that during a picnic, the battery can also power an electric grill or a small sound system.

Before Silence opened to private customers, the Barcelona-based firm worked mainly with the municipality or B2B clients such as Scoot Networks. The rideshare company that was born in San Francisco has run an electric scooter sharing in the capital of Barcelona since May 2018 reportedly. The commercial version of the Silence e-scooter is dubbed S02 and has been selling very well thus providing a perfect test base for the larger roll-out.

The first run of S01 electric scooters is now available for pre-order but limited to no more than 500 Spanish customers for now. Silence is expanding sales to the rest of Europe later this year.