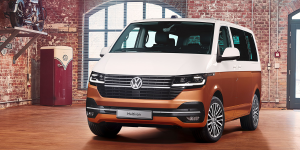 Volkswagen is giving its T6 a facelift and is now bringing the vamped Bulli model to market with a purely electric drive. The updated T6.1 minibus will be available in selected markets this autumn. This also applies to the EV version.

As an electric version, the updated Bulli has an electric motor with 82 kW and two battery options (38.8 and 77.6 kWh), whereby the largest battery should enable ranges of more than 400 km, according to NEDC. Further details on the EV are not yet available. However, at last year’s IAA Commercial Vehicles, Volkswagen and Abt already presented the eTransporter as a retrofit solution based on the T6, along with an e-cargo bike, an e-Caddy van and an electric transporter van. At this year’s Geneva Motor Show, the T6 will be presented in an electric tuning variant by Abt.

The general T6 facelift by Volkswagen is most visible on the broader radiator grille. In addition to further exterior modifications, Volkswagen has redesigned the interior of the instrument panel and saddled it with networking and assistance systems, including permanent online access.