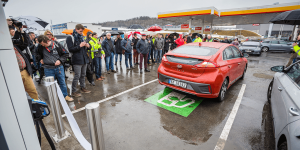 Electric car drivers in the capital of Norway must now pay for charging. Oslo has started the conversion of about 1,300 public charging points in the city to be able to charge a fee. The aim is not so much to cash in but to keep EVs from parking for free without charging.

Starting immediately, Oslo will charge ten crowns (approx. 1 euro) per hour during the day and five NOK per hour at night. At the same time, there are also plans to increase the number of charging stations to 2,000 by the end of the year.

Christina Bu of Norway’s electric car association, Norsk Elbilforening, has welcomed the step. She told the Norwegian Aftenposten that “we need to ensure rotation and that people only park at charging stations when they’re charging”.

With EV charging infrastructure lacking behind actual sales of electric cars, charging is increasingly becoming a problem, particularly in densely populated urban areas. We hear reports of incidences of electric car drivers using the free parking opportunity at a charge column without charging from people in various markets.

The (luxury) problem may further intensify as more and more electric car clubs go live. 250 Renault Zoe have just been made available in Oslo this winter, and while the new service is supposed to help alleviate public transport and supported by train operator NSB, these EVs will have to charge as well.

In Norway, almost every second vehicle registered is currently an EV. According to this CAM study, the market percentage of electric vehicles in Norway in the first three quarters of 2018 climbed from 37% to 46.7% compared to the previous year. From a European perspective and counting only passenger electric cars, Norway continues to be miles ahead of its neighbouring countries. The country had an EV share of 31,2% in 2018 according to this count.