The Tesla Model 3 is storming sales charts in Europe a few weeks after its launch. In Norway the Model 3 has taken the lead, in the Netherlands the BEV has become the best-selling model in February and in Germany, the Model 3 is also on its way to the top.

All this comes despite the fact that Tesla has so far only sold the higher-priced version in Europe. The smallest version for 35,000 dollars (net) is not yet available on the European market, and the introduction will take another six months.

Still, in Norway alone in the first week of March more than one thousand Model 3 were approved, according to elbilstatistikk.no. Since then the numbers have been rising steadily since the first units made it to the Norwegian shores. For comparison: according to the statistics, only 314 VW e-Golf (1,961 since January) and 285 Nissan Leaf (1,892 since January) were newly registered in March.

In the Netherlands, the Tesla electric vehicle also became the best-selling electric model with 472 deliveries in February.

And in Germany, the Model 3 recorded the highest number of new registrations last month with 959 units. Tesla did not start deliveries here until mid-February. With the three registrations from January, Tesla in Germany comes to a total of 961 Model 3. In the overall balance, the battery electric vehicle is currently in fourth place behind the Renault Zoe (1,581 units), the BMW i3 (1,273) and the VW e-Golf (1,027). But we expect that at the beginning of April, the Model 3 should show a lead ahead of its competitors with the March figures. 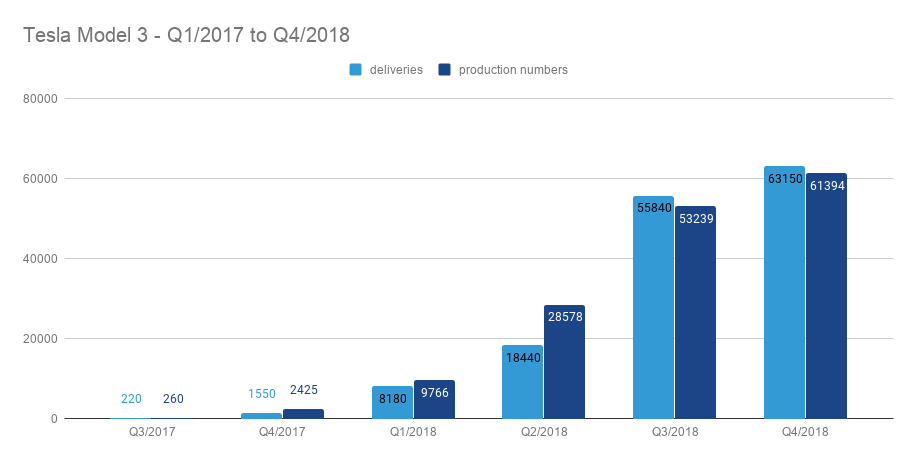 With regard to the production figures, Tesla is said to have passed the 200,000 Model 3 mark by the end of February. With the registered VIN numbers for Model 3, the Californians should even reach the 300,000 mark this quarter. Tesla intends to deliver a total of 400,000 vehicles (across all models) this year. This would mean an increase of more than 60 per cent compared to 2018.

Additionally, Tesla is rolling out a software update for all customers of a Model 3 with the largest battery option. This update should increase the range by approx. 24 km. Tesla claims that they found new efficiency in the motor and inverters, which afford the range increase, as well as increasing the peak power output by 5%.

Update 21 March 2019: As predicted, sales in Norway continue to climb. Tesla stats are updated continuously and stood at a total of 3,589 sold in Norway to date. March has proven an impressive month so far, with 2,758 Model 3 sales made throughout March, 19 and 366 sold on the day alone.