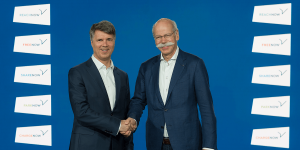 Following the merger of their mobility services and the planned cooperation in the development of autonomous cars, BMW and Mercedes could also use common platforms for electric vehicles in the future. According to media reports, confidential discussions have been going on for months already.

The talks are said to have involved not only the CEOs both the heads of development at both Daimler and BMW as well. Apparently, they focused on the development of common platforms for future car models of both brands, particularly with regards to future technology and electric cars. The companies could have potential savings of more than seven billion euros each allegedly. The manufacturers have not yet commented on the report in the Sueddeutsche newspaper yet.

By sharing a vehicle platform, the two developers estimated savings of seven billion euros each would make the step quite a logical one to take. Statements have been made by BMW’s finance chief to the effect of the company being open to a collaboration last November, so it seems safe to assume that negotiations are indeed and still ongoing.

After the merger of their shared mobility services that went through this February, and the planned cooperation in the development of autonomous cars, the two car manufacturers BMW and Mercedes-Benz could in future also use common platforms, for example for electric cars.

The German report also states that cooperation is notably driven by Mercedes’ development director Ola Källenius, who will be taking over from Dieter Zetsche as the new Daimler boss in May. One of the reasons is that the cost structure at Mercedes is significantly less favourable than at BMW. As is well known, the Bavarians are relying on a so-called convergence architecture for their electric offensive, according to which cars of different motorizations are produced on one platform and also on one production line. Mercedes’ strategy, on the other hand, is split into an electrical construction kit for electric branch-offs of existing models and one for independent (premium) electric vehicles. Both approaches could quickly reach their limits as demand for the vehicles rises, which would explain the cooperation intentions.

However, it is also clear that parts of the savings potential would probably have to be reinvested in differentiation so that future BMW and Mercedes-Benz models based on the same platform would be sufficiently different. The preservation of the respective brand cores is an issue for both companies. Because despite the different approaches, both manufacturers are still courting the same target groups.

On a similar note, there were rumours of Daimler and BMW looking into joint battery development. When we asked experts on e-mobility at both companies, none wanted to say yes but none replied no either – we’ ll leave it up to you what you make of this.